WE’RE HEADING TO THE 2ND ANNUAL BATTLE FOR CHARITY — AND WE’RE BETTING ON AN EPIC EVENT! 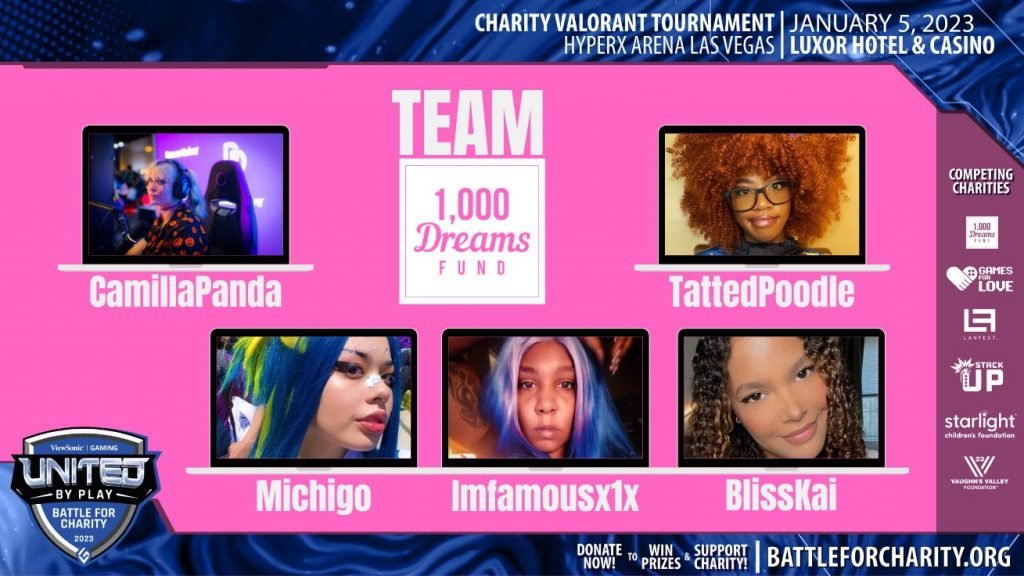 Vegas, here we come! Only a few days after the calendar clicks over to 2023, we’ll be in the Entertainment Capital of the World for the second annual Battle for Charity on January 5.

We’re so honored to be back at this incredible, invite-only event, which is hosted at the HyperX Arena. P.S. This is the same amazing venue where we’ve hosted our annual BroadcastHER Academy Esports Fellowship visits for our esports fellows, in partnership with Allied Esports and HyperX!

The Battle for Charity was epic last year (check out our 2022 recap here!) and we’re betting on more of the same this year.

At the event, pro gamers, influencers, and streamers will be competing in a live Valorant tournament for charity — and it will also be live-streamed on Twitch @LANFest and @AlliedEsports from 10 a.m. PT to 6 p.m. PT.

We’re so thrilled to be among the benefiting charities, which also includes:

We have a rad team who will be competing on behalf of 1,000 Dreams Funds.

Donors will have a chance to win exclusive prizes such as gaming consoles, monitors, PCs, and more!

Re-live all the action from last year’s Battle for Charity in this short 30-second recap video.