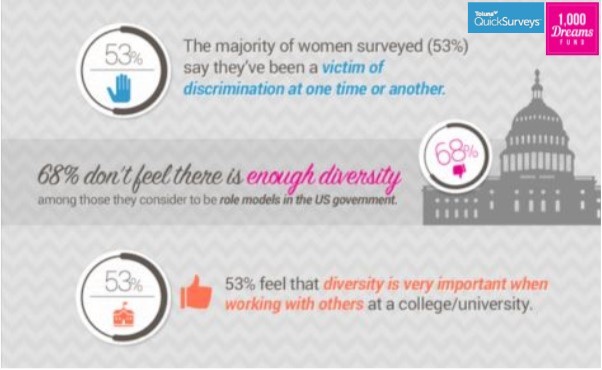 We Need Representatives for the Underrepresented: Where Are Our Role Models?

Written by Brianna Woods of the University of Missouri

I used to be nervous to discuss politics yet, I felt so strongly about how it affects the communities we live in. The male students in my classes were quick to give their opinions and I would sit silently disagreeing with everything they said. Their views did not encompass anyone’s experiences outside of their own. After awhile, I could not sit in silence any longer. I first decided to speak up in high school about how women and people of color were vital to America’s formation from legislation to culture and entertainment and I was ridiculed for it. But over time, as I became more educated on other leaders I grew a sense of esteem to use my voice even more in the midst of disrespect and disagreement. I looked to role models such as Maya Angelou or Eleanor Roosevelt for leadership examples. For papers and projects, I always chose women or people of color. I knew in my soul there legacy was important. Imagine this: Living in a world where the majority of its leaders do not share your same perspectives and experiences.

68% of people do not feel there is enough diversity among those they consider to be role models in the government.

Being led by a body that is primarily white, heterosexual, Christian males has become routine. Yet there are many individuals who are of merit outside of this group who have been overlooked for leadership positions because of our complacency of sticking to what has always been.

We are rarely educated about leaders of color within the United States. This affects our construction of role models and our ability to relate with members within our government. Therefore, it is most important to note that diversity not only references physical similarities of multiple groups but also many systems of beliefs. This is especially important in the process of creating legislation that affects young adults who are developing their stances and searching for positive role models.

This is a real problem.

As a student at the University of Missouri, I have seen many groups rally for their rights because they feel as if individuals in larger power structures are dismissive to their concerns. Often, I walk pass Speakers Circle, an area on campus dedicated to free speech and echoes throughout the campus, where groups inform bystanders of their cause. Students of color have protested for a diverse staff and against systems of oppression within their educational experiences. These groups are using their voice to promote change in their communities. These students have definitely served as leaders and role models each other and students outside of their own groups. However, vocal groups such this need leaders to propel their concerns to the government. By supporting their cause and demanding results, role models within legislation can expose these issues.

These minority groups that want to be heard are not solely applicable to college campuses but to our society as a whole.

With a big election coming up, it is the perfect time to reassess the issue of diverse role models in government positions. As we see more diverse leaders within our government, we broaden our ability to relate to one another. When we become more unified in creating diverse and positive role models for the future we are also creating a greater depiction of the leaders within this country. Despite what 2016 presidential candidate Donald Trump believes, “THIS is how we make America great again.”