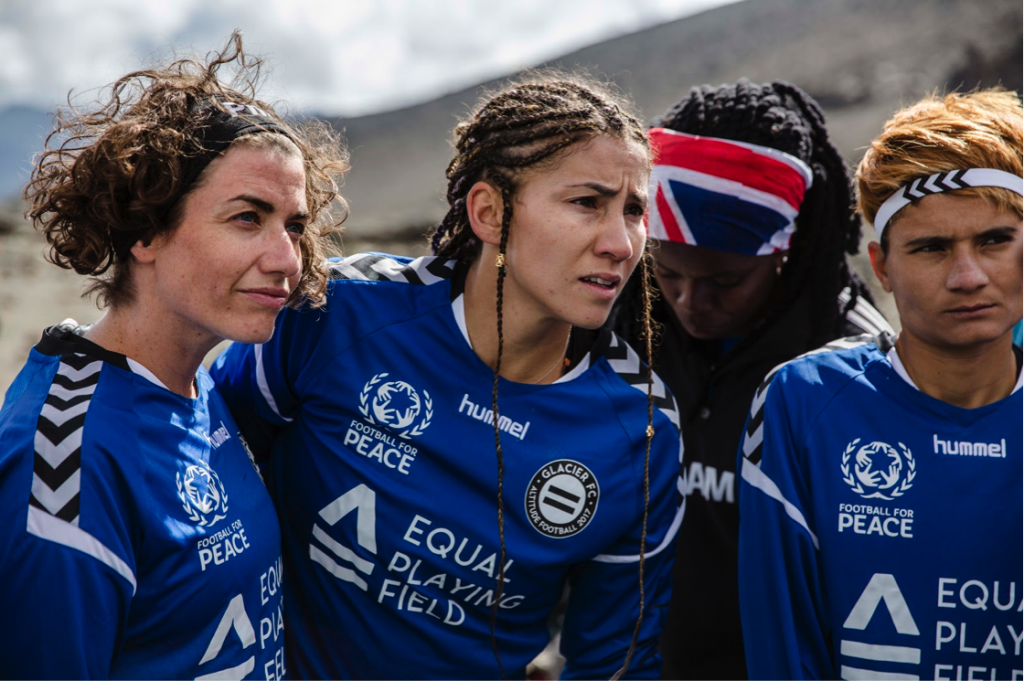 Jasmine Henderson does it all. The former professional soccer player is also a motivational speaker, single mom and author. Off the field, she’s made it her life’s mission to fight for gender equality and to use her story to empower young women.

In April 2017, she and 29 other women from 20 different countries set out on a mission to to break a world record, playing the highest altitude soccer game ever at 5,785 meters (about 18,980 feet) atop Mount Kilimanjaro. The record-breaking game was led by the Equal Playing Field Initiative, an organization that advocates for gender equality in sports. Henderson hopes that by setting a world record, she can inspire young women to climb their own mountains.

When did you first know that soccer was something you wanted to pursue professionally?

The spark began in 1999 during the Women’s World Cup in the Finals when USA defeated China. I can still remember exactly where I was and how I felt when I watched it as a 12-year-old girl. By the time I was 17, I found myself in the biggest youth soccer tournament in the world, the Gothia Cup in Sweden. As I sat in my country’s section among people from all over the world, that’s when I knew I wanted to play for a living.

What was your journey in professional women’s soccer?

My personal path in playing high-level, competitive soccer was a bit unconventional. I hope it encourages young girls who might think that  they have to have all the bells and whistles to achieve their dreams. For me, my parents played a huge supportive role. I’m still not sure how they did it. I come from a family of five kids. Playing travel ball cost time and money but because I showed commitment and dedication to the game, my parents did the same.

I started playing on the AYSO All-Star teams and turned club around 11 years old. I played throughout junior high and high school. I played three seasons of college soccer.

Tell us about going pro.

I had already torn and had surgeries on both of my ACLs. In Fall 2010, I declared that by the next year I would be in another country playing professional soccer– without an agent or any prospects. A few weeks later, a friend of mine emailed me about playing for a team in Brazil. Three more weeks passed and I was on a plane with a single bag packed for a month. I was on my way to try-out for a team in my favorite country.

Were there any barriers that you faced as a woman in the soccer world?

For many women in the world, most of the barriers they face start right at home but I was blessed that I didn’t have that experience. Especially growing up in southern California, I had access to soccer all the time. I was usually the only girl on the field and would be the last one picked until they started to realize that I was better than almost all of them!

Tell us a little about breaking a record with Equal Playing Field Initiative. What did you learn from the experience?

They were looking for pro soccer players with a passion for women’s empowerment. When they gave me the full rundown about the idea, I was in! I was sold on the first phone call! People throughout my life have told me I’m crazy. I following your dreams and taking a stand for what you believe in is crazy, I’ll gladly answer to that name.

What was the most challenging part?

As far as climbing Mount Kilimanjaro, game day was the most challenging day in my life to date, even harder than giving birth. On the mountain, there was no guarantee you were going to make it. It challenged me mentally, physically, emotionally and spiritually.

After six days of climbing, we set off at 2:30 a.m. for a five-hour climb in the freezing cold. It was pitch black. I was relieved once we reached the crater but we still had a 90-minute soccer game to play at almost 19,000 ft. Once that final whistle blew, that was the big celebratory moment. We did it! I couldn’t believe it. Reaching the summit after the game was the cherry on top. I took my picture and was done!

If you could go back and give your younger self advice, what would you tell her?

The journey is perfect and how my career played out is exactly how it was suppose to go. I would tell my younger self not to seek validation by making the best team but continue in doing what I do so well, making the best of any team.

To any young women who are facing obstacles, what would you tell them?

In every phase of life, in every part of life, you will face obstacles. That doesn’t mean your big dream is not for you. It starts with a decision, closing all backdoors. Be gracious but honest with yourself as you work toward it. When I think back on my 30 years, I’ve been blessed to be able to do so much.