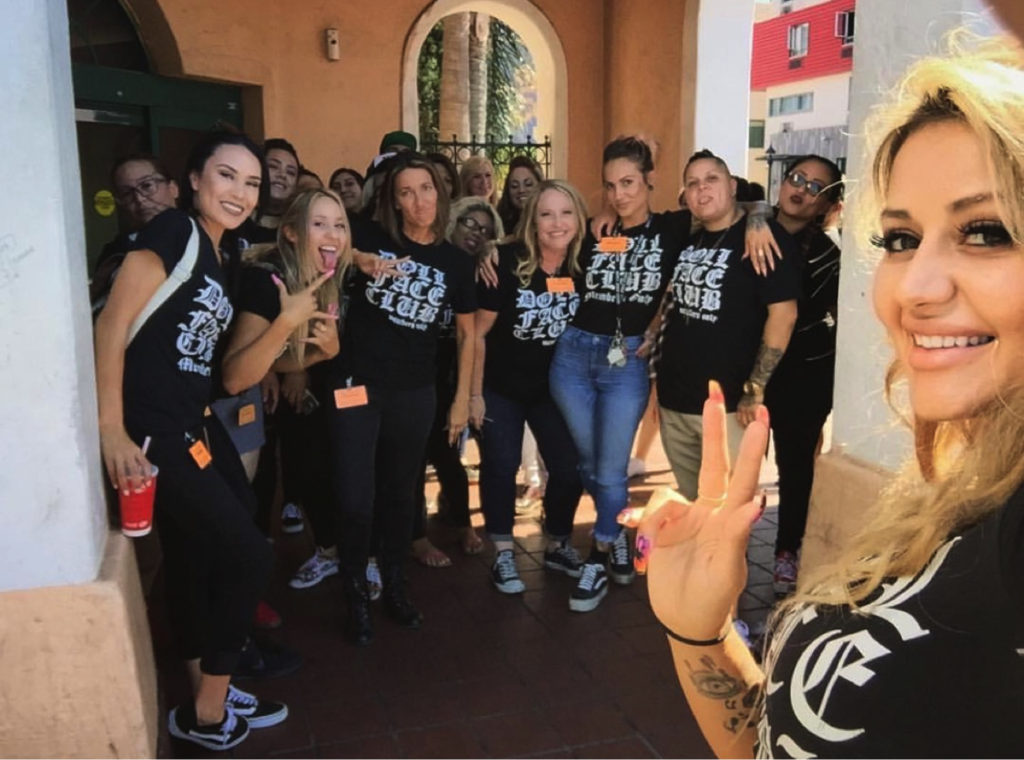 Klea Ndoci took her first narcotic when she was 12. By 13, she was deep into street life; drugs, money, robbery, and prostitution. After nine years of living on the edge–including jail time–she wanted better for herself.  At 22, she voluntarily checked herself into a rehabilitation facility and met a group of women who became like sisters. The young women started a fashion line, Doll Face Club, and turned their sisterhood into a force for good in San Diego. Now in its second year, Doll Face Club is an organization that supports and rescues women from drugs, homelessness and other criminal activity. With 200 members and counting, the group is a positive “girl gang” that wants to better the community and promote positive living.

How did the idea for Doll Face Club come about?

Since I turned my life around and got sober, I’ve always had a group of women I was super close with. The positive things we are doing now, we did back then before we named the group anything. So it was really easy to get them all together and ask if they wanted to be a part of Doll Face Club.

Who can join Doll Face Club?

While most members are women in recovery from drug or alcohol addiction, being in recovery is not a requirement to join. People think you have to look a certain way or you have to have gone through a certain thing. Honestly, it doesn’t matter where you come from, what you look like or what you’ve been through, as long as you want to do something better. That’s what it is all about; women who are uplifting each other no matter where they come from. All you need is a Doll Face Club uniform and to commit to volunteer at monthly events.

What type of work does Doll Face Club do to better the San Diego community?

We do community service once a month. I make sure that it is free. The whole point is that all it takes is some footwork. I try to switch it up and do something different each month so nobody gets bored. We go into children’s group homes, mental health facilities, senior homes, charter schools and more. We also do a lot of things with the homeless population.

Doll Face Club is known for not smiling in pictures. Why is that?

I know for me growing up, I was never into the super smiley girls. When you have been through some hard stuff and you see people who are super happy, you don’t understand how they get there. I like to keep it as real as I can.

How has community service affected the members of Doll Face Club?

I think community service is something the girls have always wanted to do but didn’t know how. So by coming up with something different to do each month, it opens their eyes to what is really going on out there. For some people, the traumatizing things that have happened to them have not been public. For somebody, a domestic violence class will hit home. For somebody else, when we work with the foster homes, it will initiate something within themselves and inspire them. That’s what it is about, opening their eyes to something bigger than themselves.

Whatinspires you and keeps you motivated?

I think the number one thing that inspires me is seeing someone who was lost doing something for themselves. I see it all around me. It’s not something I did, but it is something I hope I inspired somebody to do. That’s what it is about.

What advice would you give to young girls and women struggling with addiction?

You don’t have to live that way. I felt growing up, this is the way I’m going to die. There were times when I literally had no hope. It takes that little bit of hope to reach out and when reaching out, it’s hard to find something that feels real. That’s what we’re here for. Reach out to Doll Face Club. Get at me.