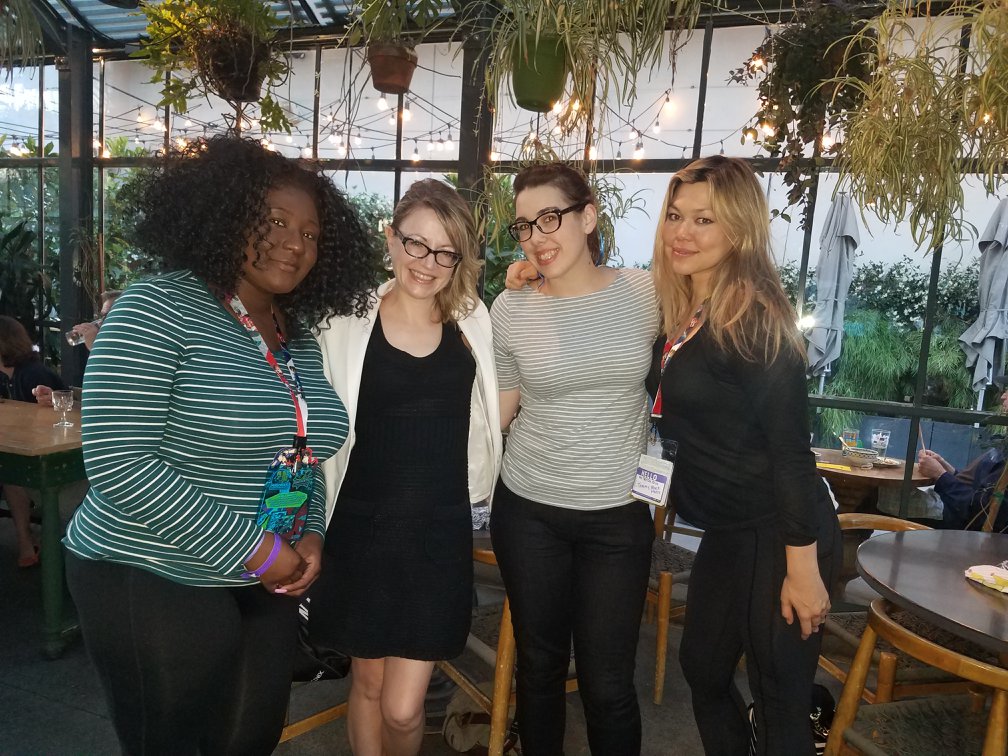 At E3 2018 in Los Angeles, California, it was all fun and games—and gamers!

Thanks to the support of the ESA Foundation, 1,000 Dreams Fund recently attended the 24th annual Electronic Entertainment Expo on June 12-14 that brings together the interactive entertainment industry’s top talent for three days of innovative new technologies, never-before-seen products, and leading-edge games. With our new 1DF – Twitch BroadcastHER Grant Program announced in March 2018 and our 1DF BroadcastHER Academy – powered by HARMAN announced at E3, there couldn’t be a more appropriate place for 1DF to be!

Upon arrival in L.A., we quickly dove deep into the digital world with E3’s inspiring content while networking with industry execs, gamers, and influencers.

One of our favorite things to see was the ESA Foundation’s Charity Wall. It celebrated the Entertainment Software Association’s #WeAre initiative that inspires new female voices and talent to join the video game industry. We were so honored that 1,000 Dreams Fund was highlighted among three other amazing organizations.

And, thanks to a generous $5,000 donation from the ESA Foundation, we will be able to fund even more young women in gaming, broadcasting and STEM this year!

Plus, we were able to offer a VIP experience to several of our Twitch broadcast partners who were fundraisers for us during Stream for Dreams — our Women’s History Month charity event in partnership with Twitch — as a thanks for their amazing efforts! Our fabulous Twitch friends included: @tammy_blackmedia, @xmiramira, and @josietoxic who joined 1DF founder Christie Garton for the E3 experience.
Here is a recap of some of our favorite moments from E3!

The scene at E3

With more than 62,000 attendees at the video game wonderland, and so much to see (and play!), we had our game faces on to scope out everything from Super Smash Bros. Ultimate, to Halo Infinite, Spider-Man and Fallout 76 along with panel discussions and more.

This photo was taken by Star Foreman at the WIGI afterparty, and made a cameo in LA Weekly

“E3 was a wonderful reminder that women in the gaming and streaming space have a shared story—one that we are all helping to shape going forward,” said Twitch broadcaster @josietoxic. “Hearing different women’s stories was incredibly impactful, and the enthusiasm and determination for change was inspiring.”

“After hearing brilliant women like [The Wealthy Factory founder/CEO] Angel Rich speak at the Games for Impact Summit and [Funomena founder] Robin Hunicke at the “Small Studios, Big Ideas” panel and spending time with Christie [Garton], whose work allows women to pursue their passions every day, it hit me how much things are changing right now for females in this space,” said Tammy Byerly (a.k.a. @tammy_blackmedia), a leading Twitch female broadcaster and singer/songwriter.

“Interacting with all of the different people at E3, while watching the panels and seeing influential, intelligent women and men discuss the need for diversity in gaming and pushing for change was definitely the motivator I needed to continue my journey,” said Twitch broadcaster @xmiramira.

Are you a female broadcaster on Twitch—or do you know someone who is? Find out more about our 1DF – Twitch BroadcastHER Grant for the chance to get up to $2,000 in funding for creative and artistic pursuits. The Fall 2018 semester application opens on August 1!