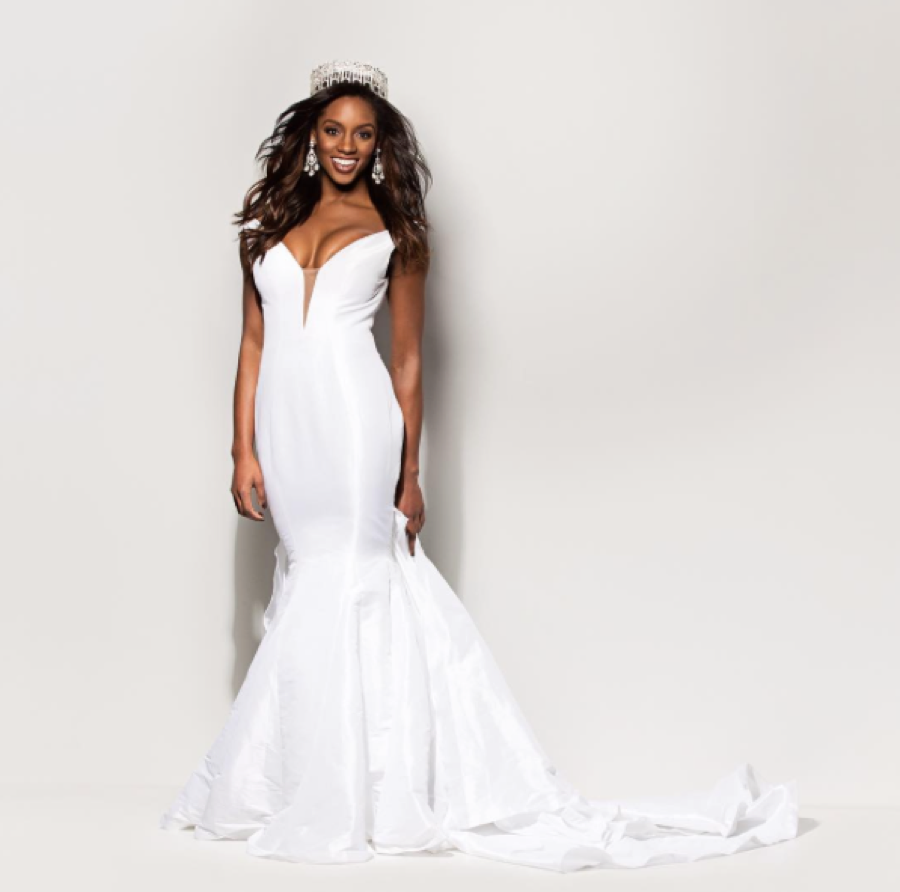 Desiree Williams is not your average beauty queen. This year, the gorgeous doctor graced the national stage as a Top 10 finalist in the Miss USA pageant. But Desiree wasn’t always so confident, accomplished and self-assured. Like many of us, she struggled in high school with self-esteem; she was an acne-prone, introverted girl. But, after making her late grandmother a promise, the Hampton University graduate made the decision to take a chance on herself.

What were you like in high school and college?

I have always been a hard working, goal-oriented person. In high school, I maintained straight A’s while working 20+ hours a week as a cheer/tumbling coach.  However, although I was a leader at work, I had a tendency to be more reserved and quiet in social settings. I was self-conscious about my muscular build, acne-prone skin, braces, and glasses; so my objective was often to go unnoticed.

After tripping in my heels both during the interview and evening gown phases of competition and still walking away with the title, I realized that no one is expecting perfection.  Competing in the Miss Hampton pageant was not just a step outside of the box, but also a giant leap outside of my comfort zone that helped me to realize my talents and capabilities.

That’s awesome. How have you have managed being a pageant queen and a doctor in physical therapy?

The first skill I had to master was time management.  It was important that I learned to prioritize.  I learned to create priority lists early on, and my social life often (almost always) became secondary. In addition to being a physical therapist, I currently work full-time as a faculty member at Hampton University as the Interim Director of the William R. Harvey Leadership Institute, as well as an Assistant Professor in the Department of Physical Therapy. Performing in front of millions of viewers during the nationally televised Miss America and Miss USA Pageants more than prepared me to lecture in front of a group of up to 150 students.

Whew! How much longer will you continue pageants? What’s your next adventure?

I continued to hold the title of Miss Virginia USA until November. After I pass this title, I will be officially “retired” from pageants.  Having competed at both Miss America and Miss USA, I feel I have exhausted the “big two.”

As I look toward my future, I plan to pursue on-air entertainment and lifestyle hosting.  After being introduced to the stage and camera through pageants, I have had the opportunity to do some on-camera work locally, and have fallen in love!  I am hoping to continue to expand my network and hopefully make it on a major cable network someday soon.

What advice would you give to a student who struggles with balancing and/or prioritizing?

One of my favorite quotes comes from Antoine de Saint-Exupéry: “A goal without a plan is just a wish.” Without focus, you are sure to get distracted.  I encourage everyone to write down their goals and share those goals with someone who is willing and able to hold you accountable. Create a plan to achieve each goal, and execute.

But more practically, limit your time watching television and on social media.  Put your text messages and social media platforms on ‘do not disturb,’ and get to work!  While you’re sleeping (or scrolling through your timeline), someone else is out there grinding and taking your job.

My mother is absolutely my rock! Growing up, she worked full-time, but ensured my sister and I never felt slighted.  She is Superwoman.  When I’m having a rough day, she reminds me to listen to Mary Mary’s “Go Get It” as I continue to pursue my life’s blessings.

What advice do you have for young women?

Trust yourself/your gut feeling. After years (decades, really) of constantly seeking the approval of others in my decisions, I have finally learned to trust what we often refer to as our “gut feeling.” Don’t limit yourself.

I tell people all the time that had somebody told me five years ago that I would have any of my current roles, I would have laughed in his/her face.  Five years ago, I was nervous about competing in my first pageant and was graduating from the Leadership Institute of which I am now the Interim Director. I could not have even dreamt up the life I am living—having competed in two nationally televised pageants and working as faculty at my alma mater—but I make it a point to take advantage of every positive opportunity presented.

Finally, never give up! Along my journey, I have been met with setbacks, misfortunes, tears, and countless sacrifices.  Oftentimes, giving up is the most attractive option.  However, if the “why” behind a goal is big enough (and you have a mother to tell you to listen to Mary Mary), you know to wipe away those tears and go get your blessing!

Desiree Williams is living her dreams!